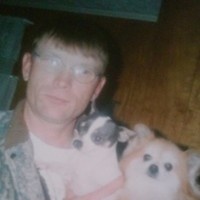 Robert Glen Jackson, 44, of Abilene passed away Sunday March 20, 2016. His graveside service under the direction of Quinlan Funeral Home will be 10:00 am at Bethlehem Cemetery in Farmersville on April 19, 20126.

Robert was born June 25, 1971 in Dallas to Joseph Andrew Jackson and Denna Lane (Watson) Jackson. By trade he was a carpenter in the building construction. He is remembered for his love of kids, nature and his love of God.

He is preceded in his death by his parents, and his sister, Linda Jackson.

Those left to cherish his memory are lifelong love Rachel Stout, his son Kevin Jackson and fiancé Misty Hennings of Gilmer and his daughter Katlynn Jackson of Gilmer; his siblings Beverly Seaton and husband Denny of Fort Worth, Richard Jackson of Abilene, Joseph Jackson of Abilene and Tonya Delgado of Arlington; nieces, nephews, relatives and friends.

To order memorial trees or send flowers to the family in memory of Robert Jackson, please visit our flower store.