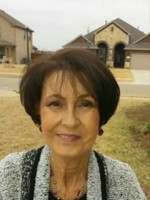 Reba Lavonia Dosier, age 68, of Mesquite, passed away Sunday, December 18, 2016 in Sunnyvale. She was born August 5, 1948 in Dallas the daughter of Joe C. and Clemmie Cleve (Wright) Smith.

Funeral services will be held Thursday, December 22, 2016 at 2:00 pm in the Quinlan Funeral Home Chapel. Interment will follow at Quinlan IOOF Cemetery. Visitation will be held at the funeral home from 6:00 pm to 8:00 pm Wednesday, December 21, 2016.

To order memorial trees or send flowers to the family in memory of Reba Dosier, please visit our flower store.