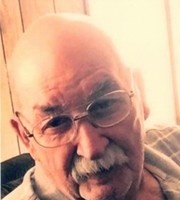 Rufus Ervin Simpson, Jr. known by most as R.E. went to be with our Lord and Savior on July 12, 2018 in Quinlan. R.E. was born on May 27, 1936 in Terrell to Rufus Ervin Simpson, Sr. and Pauline (Hinton) Simpson. He was a long-time resident of Quinlan. He graduated from Terrell High School. He married Nina Pearl Langford on October 29, 1955 and raised five children. R.E. was one of the founders of QSA and enjoyed coaching, participating, and watching his children and grandchildren. He was a 20 plus year member of Quinlan Fire Department. He also loved to watch his grandsons race cars.

R.E. is preceded in his death by his wife of 61 years, Nina; a son, David Simpson; his parents, Rufus and Pauline Simpson; great grandson, Dawson; son-in-law, Greg Malone; and brothers, Jack Simpson and Frank Simpson.

His memorial service will be held at 10:00 am on Saturday, July 21, 2018 in the Quinlan Funeral Home Chapel with Bro. LeRoy Willis officiating.

To order memorial trees or send flowers to the family in memory of R. Simpson, please visit our flower store.