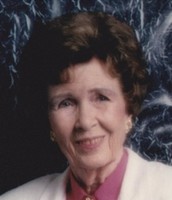 Norma Langford, 102, of Quinlan passed away on March 8, 2017 in Greenville. She was born in Durant, Oklahoma on August 17, 1914 to her parents, William Virgil and Bessie (Wygal) Miller. Norma married Edward Woodrow Langford on September 3, 1936 and he preceded her in death. She was a member of the Quinlan First Assembly of God Church.

She is also preceded in death by her parents; two brothers, Wilson Miller and Donald Miller; one sister, Geraldine "Gerry" Miller Smith.

Visitation with her family will be Friday night from 6:00 to 8:00 at Quinlan Funeral Home. Her funeral service will be Saturday, March 11, 2017 at 2:00 pm in the Quinlan First Assembly of God Church. Burial will follow the service in the Quinlan Odd Fellow Cemetery.

To order memorial trees or send flowers to the family in memory of Norma Langford, please visit our flower store.