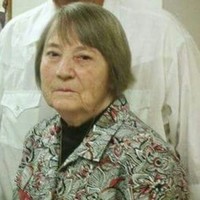 Nina was born on August 1, 1937 in Quinlan to Jack and Irene Langford. She is a long time resident of Quinlan. She graduated from Quinlan High School. She married Rufus (R. E.) Simpson on October 29, 1955 and raised five children.

Nina is preceded in her death by her parents, Jack and Irene Langford; her son, David; grandson, Dawson; and a son-in-law, Greg Malone.

To order memorial trees or send flowers to the family in memory of Nina Simpson, please visit our flower store.