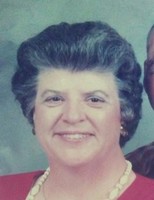 Mary Fay (Fielden) Stunkard-Jetton was born July 16th, 1943 as a twin to her brother, Larry. They were 3rd & 4th of six children born to her parents, Curtis Claude Fielden and Margaret Christine (Ritchie) Fielden. She was the only girl.

She grew up on a farm in Sherman, Texas, and graduated High School in 1961. Mary Fay married Howard Stunkard in 1962, and they had a daughter, Lana, in 1963. Their son, John, was born in 1965. She and Howard divorced in 1974, and she went to work for First State Bank - Mesquite in 1976. In 1981, she married Jimmie Jetton. She retired from the bank in 2009 after 33 years and lived the remainder of her years on two acres not too far from Quinlan, with her two much beloved dogs: Princes and Tasha.

She was a very strong woman who fought through adversity for everything she had. She survived Appendicitis as a young child. In late 1964 and early 1965, while pregnant with John, she was exposed to and contracted Polio. At one point throughout her disease, she lost the use of all her limbs, and it was only through intense physical therapy that she fought her way back to full health with the exception of her right leg. She didn't let that stop her though, she figured out how to drive, how to ride a horse and how to raise two rambunctious children on her own.

She beat cancer twice and spent the last four years of her life on home Dialysis due to kidney disease before cancer returned this last time to claim her life but not her soul.

She was a Godly woman & attended Grace Baptist of Quinlan as long as she was able. She & her daughter, Lana, often spoke about their faith and their prayers that the other members of her family would find their way to knowing and loving the same God that they knew, know & love. As she neared the end of her journey on Earth this desire became more urgent.

Services for Mary Fay (Fielden) Stunkard-Jetton will be held on Tuesday, October 10, 2017, at Quinlan Funeral Home: 8930 Hwy 34 South, Quinlan TX 75474. Visitation will start at 10 AM, with the funeral service immediately following at 11 AM. Interment will take place at Cedarlawn Memorial Park in Sherman, TX.

To order memorial trees or send flowers to the family in memory of Mary Stunkard-Jetton, please visit our flower store.