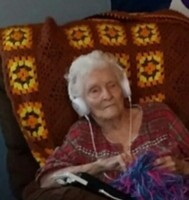 Mary was born May 1, 1916 in Odessa, Texas to Julius Drew Henderson and Montye Mae Bateman Henderson. She married George Shampanore March 24, 1943 in Alexandria, VA and he preceded her in death just sixteen short years after their marriage.

To order memorial trees or send flowers to the family in memory of Mary Shampanore, please visit our flower store.