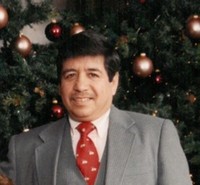 Martin "Ricky" Rosas, 69, of West Tawakoni, passed away on March 18, 2016 at his home. Ricky was born on May 3, 1946 in Sugarland to the parents, Martin Ramirez Rosas and Isadora (Vidales) Rosas. He married Donna Kay in Dallas on January 15, 1981. He served his country during the Vietnam Conflict in the US Army. He worked for many years as a buyer for Ericsson.

His funeral service will be Tuesday, March 22, 2016 at 10:00 am in the Chapel of Quinlan Funeral Home with Rev. James Pappas officiating. Interment with military honors by US Army, will follow the service at the Blue Ridge Cemetery, Blue Ridge, Texas. Visitation with the family will be held on Monday, March 21 from 6:00 to 8:00 pm at the funeral home.

To order memorial trees or send flowers to the family in memory of Martin Rosas, please visit our flower store.