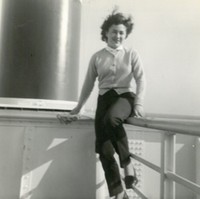 Lucy Johnson, 83, of West Tawakoni, passed away February 27, 2016 in Greenville. Born Lucy May Roberts, May 1, 1932 to Henry Roberts and Elizabeth Stuart McDonald in Edinburgh, Scotland.

As a young woman, Lucy and her friends bicycled all over Scotland. After Lucy graduated from school, she went to work for Ferranti's where she met Thomas Stark Johnson. Lucy and Tom were married July 4, 1953 in Edinburgh, Scotland. In 1955, Tom and Lucy immigrated to the United States. Lucy and Tom lived, worked and raised their children in Connecticut and New Hampshire. Before retiring, Lucy worked as a bookkeeper for the YMCA in Bridgeport, Connecticut, held a position as General Manager of Hillandale Country Club in Trumbull, Connecticut and worked as a case manager for an insurance company in Manchester, New Hampshire. Lucy and Tom retired to Daytona Beach, Florida where they were avid golfers and active members of the Westminster Presbyterian Church. She also was a volunteer in the library at one of the local elementary schools. Lucy moved to West Tawakoni in 2005 where she enjoyed living closer to family. Lucy was a member of the Daughters of Scotia and the Tawakoni Civic Club.

Lucy is survived by her son, Glenn Johnson and his wife Gwen of West Tawakoni; daughter, Laurie Villalpando and her husband Andy of Hooper, Utah; grandsons, Shawn Johnson and wife Diane of Marlton, New Jersey and Shane McWhorter and wife Catlin of Elkridge, Maryland; great granddaughters, Amelia and Madelyn; and numerous loving nieces and nephews in the New England area.

The family will receive friends and family on Saturday, March 5th between 1:00 and 3:00 at their home in West Tawakoni.

Her cremation is under the direction of Quinlan Funeral Home.

To order memorial trees or send flowers to the family in memory of Lucy Johnson, please visit our flower store.