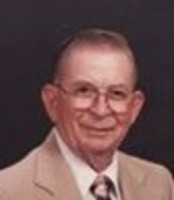 Louis Harold Eugene Thiessen, 93, of Quinlan passed away Tuesday, April 5, 2016 in Kaufman. Funeral service will be held 11:00am Saturday, April 9, 2016 at the New Hope Baptist Church in East Tawakoni. A gathering of family and friends will be 6:00pm until 8:00pm Friday, April 8, at Quinlan Funeral Home.

Louis was born October 27, 1922 in Fairview, OK to Dietrich Jona Thiessen and Anna Marie Jantzen Thiessen. He served his country in the U.S. Army and later worked as a supervisor for Sweetheart Cup. He married Edith Lucille Shimp September 11, 1954 in Amarillo.

To order memorial trees or send flowers to the family in memory of Louis Thiessen, please visit our flower store.