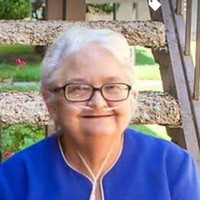 Judy was known as "Maw-Maw" by her grandchildren. Her siblings knew her as "Great Big Sister." She loved her family more than life itself. Some might say that the family was "clannish" due to how close they all were to each other. Judy was smart, modest, humble, very spiritual, with a personal relationship with Jesus Christ. In her life Jesus was number one and Norman was number one "A" with the Dallas Cowboys being a close number two in her heart. The first time Norman met Judy they went to a café to eat, walking back to his truck he told her, "I'm gonna marry you." Judy responded, "Only way you'll get away from me is if you die." Their love for each other is rare and exceptional.

Judy is preceded in her death by her parents; a sister, Sandie Webb; and a grandson, James Riley "JR" Wallace, Jr.

Her service will be held on Tuesday, October 3, 2017 in the Chapel of Quinlan Funeral Home at 10:00 am with Brother Larry Combs officiating. Burial will follow the service in Oakland Memorial Park in Terrell. Public visitation with her family will be held on Monday, October 2nd from 6:00 to 8:00 pm at the funeral home.

Most important, Judy was a faithful soldier for Christ up until the end, among her last words were, "Don't be sad, it's all in God's hands"

To order memorial trees or send flowers to the family in memory of Judith Wallace, please visit our flower store.