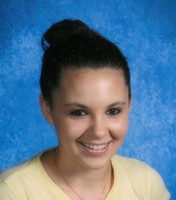 Josie Nicole Schlosser, 22, of Mesquite formerly of Quinlan passed away Tuesday, December 29, 2015 in Dallas. A memorial service is scheduled for 11:00am Thursday, January 7, 2016 at the Quinlan Funeral Home Chapel with Rev. Bob Vacendak officiating. Cremation arrangements are under the direction of Quinlan Funeral Home in Quinlan.

Josie was born June 4, 1993 in Mesquite, Texas to Jeremy Wayne Schlosser and Kimberley Ladon Whaley Vidal. She was high spirited and had a love for making people happy. She will be remembered for her contagious smile and her love of life.

Memorial contributions may be made in Josie's name to the SPCA.

To order memorial trees or send flowers to the family in memory of Josie Schlosser, please visit our flower store.