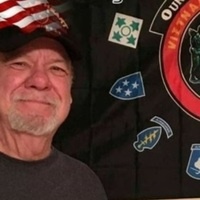 Joseph Sanderson passed away February 23, 2020 in Canton. Joseph was born in Grand Prairie on February 9, 1948 the son of Olli and Jan Sanderson. He served in the Vietnam War as a member of the United States Army.

He is survived by his daughter.

A memorial service will be held at a later time.

To order memorial trees or send flowers to the family in memory of Joseph Sanderson, please visit our flower store.