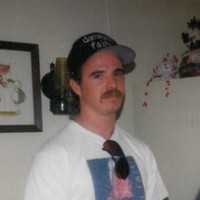 John Charles Stevens passed away January 18, 2017 at the age of 52. He was welcomed into this world October 5, 1964 the son of Raymond Stevens and Emily Higgins. He married Francis Eversole. She survives. He was a member of the American Legion Post #517 in West Tawakoni.
Those also left to cherish his memory are his daughter, Elizabeth Herring, of Quinlan; step-children, Bill Kidd and his wife Chantel, Ronald Cornstubble, Michael Cornstubble, and Michelle White, all of Blue Mound; mother, Emily Green, of West Tawakoni; sister, Tonya Latham, and James, of Florida; five grandchildren, Blake Herring, Bree Ann Chote, Ashley and Dakota Kidd, and Mackenzie White.
He was preceded in death by his father; sister Jacqueline Ruth Stevens; and brother, Jerl Lee Stevens.
A celebration of John's life is planned for Saturday, February 11, 2017 at 2:00 PM in the American Legion Hall West Tawakoni.
To order memorial trees or send flowers to the family in memory of John Stevens, please visit our flower store.