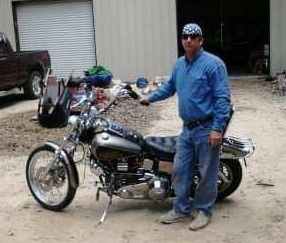 Graveside funeral service for John Michael “Mike” Lewis, age 66, of Quinlan will be held at 3:00 P.M. on Tuesday, June 7, 2022 at Elliott Cemetery in Gunter, Texas with Jeff Maynor officiating. Visitation will be held from 6 to 8 P.M. on Monday, June 6, 2022 at Quinlan Funeral Home. Mr. Lewis passed away on Friday, June 3, 2022 in Greenville.

Mike was born on April 3, 1956 in Mesquite, Texas to John and Dorothy (Jones) Lewis. He married Cynthia Cofer on February 11, 2006 in Quinlan. Mike was a plumber and a Taekwondo instructor. He enjoyed fishing, boating, riding his Harleys, hunting, playing pool, and enjoying 4 Roses by a nice fire.

He is survived by his daughter, Lisa Little and husband, Roland Wortman of Quinlan; sons, Robert Little of Greenville, John Michael Lewis, Jr. of Princeton; brother, Gregory Lewis and husband, Don; and many loving cousins and family friends, and his beloved fur-babies Parker and Dusty.

To order memorial trees or send flowers to the family in memory of John Michael Lewis, please visit our flower store.