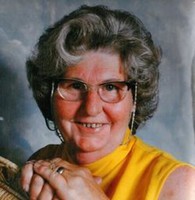 Jewel Kohutek,77, passed away on Saturday, March 22, 2014 in McKinney, Texas. Jewel was born on July 21, 1936 to Jesse and Lestle Neal in Buffalo, Texas. She would meet and later marry Cecil Kohutek in 1961. He would remain the love of her life for fifty-two years.

Jewel and Cecil would make their home in Quinlan, Texas in 1970. There she would work at the Save Mart for many years. Jewel had many passions in her life; cooking, sewing, and quilting. But her greatest passion was her love forher family. She treasured the time she spent with her husband, children and grandchildren. Her warm hugs, infectious laugh and shiningsmile will truly be missed by all who knew her.

Jewel is preceded in death by her parents, Jesse and Lestle Neal; her brothers, George and James Neal and her son Joe Ray Kohutek.

A visitation and celebration of Jewel's life will be held on Thursday, March 27, 2014 from 6:00 to 8:00 p.m. at the funeral home.
To order memorial trees or send flowers to the family in memory of Jewel Kohutek, please visit our flower store.