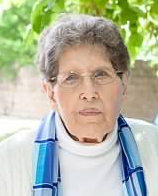 Jessie Pugh, 102, long time resident of Quinlan, passed away on Monday, February 28, 2022 at her care facility in Richardson, Texas.  Jessie was born on July 16, 1919 in Winnsboro, Texas, daughter of Amanda (Russom) Messimer and John Sherman Messimer.

Jessie worked as a seamstress prior to her retirement and enjoyed sewing, quilting, and taking care of her family. Her sewing and quilting skills won her a number of ribbons in the local county fair. She was an avid Dallas Cowboys fan and treasured the signed photograph of Roger Staubach she received on her 95th birthday.  She was married to her husband, Daniel Pugh, in 1945 until his passing on April 28, 2007.

Funeral service for Jessie will be held at 12:30 P.M. on Saturday, March 5, 2022 at Quinlan Funeral Home with Mike Middlebrooks officiating and Anthony King, Brian Johnson, Bryan King, Gavin Steiger, Harrison Counts, and Sean Stockton serving as pallbearers. Visitation will be held thirty minutes prior to the service. Burial will follow at Restland Memorial Park in Dallas.

In lieu of flowers, please send donations in memory of Jessie Pugh to the Cure Alzheimer’s Fund: https://curealz.org/outreach/in-memory/jessie-pugh/

To order memorial trees or send flowers to the family in memory of Jessie Pugh, please visit our flower store.