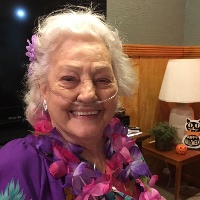 Helen Hammonds Trent, 84, passed away on August 22, 2019 in Alamogordo, New Mexico. She was born on October 18, 1934 in Victory, Texas to Clifton and Eula (Sharp) Clark. She married Norvle Hammonds on May 13, 1947 in Texas. He preceded her in death in January of 1976. She was a homemaker and waitress at Shoot the Bull BBQ.

A funeral service for Helen Trent will be held at 11:00 am on Monday, August 26, 2019 in the Quinlan Funeral Home Chapel with Edward Fox officiating. Private burial will be held at Laurel Land Memorial Park in Dallas.

To order memorial trees or send flowers to the family in memory of Helen Trent, please visit our flower store.