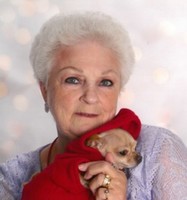 Helen Jeanette Barton-Lemons, 76, of Quinlan passed away May 27, 2018 in Greenville. She was a member of the Quinlan Eastern Star since 2002 and worked at E-Systems as an electronic assembler for 13 years.

She was born on February 23, 1942 in Dallas and married Ronald D. Lemons on August 8, 1998, who preceded her in death. Also she was preceded by her father, Leon Clifton Reed; mother, Dorothy Lucille Pitts; daughter, Barbara Jeanette Barton; brother, Lester Reed.

She is survived by her son, Ronald D. and his wife Mary Jo Barton; brother, Lloyd Reed and his wife Donna; granddaughters, Caylin Barton, Rhiana, and Rachel and her husband Scott; and five great grandchildren.

Her memorial service will be held on Friday, June 8, 2018 at 10:00 am in the chapel of Quinlan Funeral Home. Inurnment will follow the service in Lakeside Memorial Park in Quinlan.

To order memorial trees or send flowers to the family in memory of Helen Barton-Lemons, please visit our flower store.