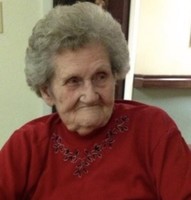 Gloria D. Brewer Roberts, 87, passed away Thursday, April 20, 2017 in Terrell. She was born the daughter of Lelard and Ruby Sanders in Lebanon, Oklahoma on October 14, 1929. She married Thomas Roberts in Quinlan on May 28, 1977. Gloria was of Baptist faith and a member of the VFW Auxiliary, American Legion Auxiliary, and Am Vets Auxiliary.

A visitation will be held in the Quinlan Funeral Home Chapel on Saturday, April 22, 2017 from noon to 2:00 pm. Graveside services will immediately follow at Quinlan IOOF.

To order memorial trees or send flowers to the family in memory of Gloria Roberts, please visit our flower store.