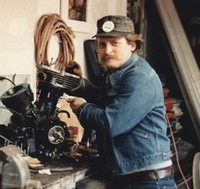 George "Rat" Phillips, 73, of Quinlan, passed away on February 23, 2016 in Dallas. He was born in California on February 9, 1943 to George Stephen Phillips and Helen (West) Phillips. He served his country during the Vietnam Conflict in the US Navy. He was a diesel mechanic by profession, a member of the Over the Hill Gang Car Club, and a member of the Centurions Motorcycle Club. He was a biker, hot rod enthusiast, proud dad and grandfather and a best friend to all.

George is survived by his son, Joseph "Joey" Phillips of Balch Springs; his daughter, Sheree Wood and her husband Nathan of Rowlett; his brother, Ted Lamb of VA; his sisters, Terri Lamb Proffitt of VA and Tammy Lamb Trivett of TN; his grandchildren, Meagan Hayes, Katelyn Wood, Trent Wood, and Olshey Phillips.

To order memorial trees or send flowers to the family in memory of George Phillips, please visit our flower store.