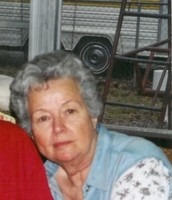 Floy Mae "Pug" Wilson, 87, of Ft. Worth passed away on September 9, 2017 in Ft. Worth. She was born on March 31, 1930 in Nashville, Arkansas to her parents, Luther William Aylett and Mary Virginia (Ramage) Aylett. She married Charlie Walker Wilson, Jr. and he precedes her in death. She is also preceded in death by her parents and siblings.

Floy and Charlie moved to the Lake Tawakoni area in 1977, living in the Cherokee Cove housing addition. Floy Mae "Pug" Wilson was also known as "Granny" as she was called by her grandkids, "Peach Queen" by some from her hometown, and "one of the triplets" of which she was proud to be called. She will also be remembered for her gardens she grew and for her love to go to auctions.

Her family members who are cherishing the memories of her life are her children, Chuck Wilson and his wife Teresa, Charlean Mathis and her husband Joe, and Steve Wilson and his wife Angie; 12 grandchildren, April, Rachel, Sarah, Charlie, Andrew, Hannah, Daniel, Joseph, Amy, Amber, Stephen, and David; 12 great grandchildren; her triplet brother, Coy Day Aylett; numerous nieces, nephews, and other relatives.

The graveside service will be held on Thursday, September 14, 2017 at 11:00 AM in Lakeside Memorial Park in Quinlan with her cousin, Pastor Ted Stanton, officiating. The family request that memorials be made to James L. West Community Hospice. Forms for donations can be downloaded from their website, jameslwest.org.

To order memorial trees or send flowers to the family in memory of Floy Wilson, please visit our flower store.