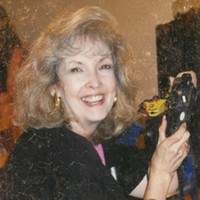 Evelyn Marie (Mize) Elliott was born on August 17, 1940 and passed away on July 15, 2018. She is preceded in death by her parents, Harvey Lee Mize, Viola (Lowe) Mize, her siblings Janet Mize Sanders, Roger Glen Mize and her son Kevin Kyle Elliott.

Evelyn was born in Greenville, Texas where she grew up, but was a long-time resident of Mesquite, Texas. She was a beautiful child, favored much by her father Harvey and was the second of twelve children. Her partner in crime was Nell Smith, a sister that was a year her senior. Evelyn would miss at least two weeks out of each school year to pick cotton. It is amazing that Evelyn had a stuttering issue early in life, as she grew out of this and had a singing voice of an angel, people around her in church would always compliment her. She also wrote several gospel songs as well.

Evelyn was a true beauty, and many compared her to a 50's pin-up girl. She dated and fell in love with Lee Elliott in his red and white 1956 Ford. After their marriage, they had three children: Sherry, Stacey and Kevin.

Evelyn enjoyed traveling, but always enjoyed arriving back home as she was a homebody. She loved to sunbath, composed gospel songs, was an avid reader, a wonderful housewife. Evelyn. prided herself in great homecooked meals. An expert at ironing her husband's shirts, she loved detective magazines and mysteries. Her favorite theme in the Bible was Biblical Prophecies.

Evelyn loved her flower gardens, was a faithful viewer of the Young & the Restless for many years. She loved her casinos and has won several times. Evelyn enjoyed horror movies, junk food and her beloved Pepsi Cola. She was a "word smith" that had a knack for using verbiage from another century, i.e. Balderdash!! She had a passion for Elvis Presley since a very young age. Evelyn was eccentric by choice and loved wearing dressy black and reds. She looked forward to the news and her standing in-law days on Wednesdays from her son in law Greg Piccolella. This weekly visit was a highlight in her life.

Her funeral service will be held on Wednesday, July 18, 2018 at 11 am at Quinlan Funeral Home chapel. Visitation with her family will be one hour before the service. Burial will follow the funeral service in Bethel Cemetery in Greenville.

To order memorial trees or send flowers to the family in memory of Evelyn Elliott, please visit our flower store.