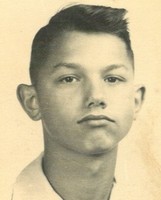 Tom Holdren, 79, of Quinlan passed away Saturday March 5, 2016 at his residence with his family at his side. Memorial services will be scheduled at a later date. Quinlan Funeral Home is in charge of the arrangements.

Tom was born an only child to Brodis Thomas Holdren and Bertha Louise O'Brien Holdren on May 19, 1936 in Covington, Virginia. He worked as an office manager for a furniture company most of his career until his retirement.

Those left to cherish his memory are his sons Erich Duane Holdren and wife Cindy of Quinlan, and Mark Thomas Holdren and wife Barbara of Conover, North Carolina; grandchildren Justin Holdren, Constance Holdren and Tarran Holdren; great grandchildren Ada and Aliyah. Tom was preceded in death by his father and mother.
To order memorial trees or send flowers to the family in memory of Ernest Holdren, please visit our flower store.