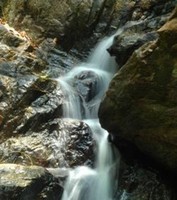 Pearl Hayes was born January 5, 1919 near Oologah, Oklahoma. She married David Lee Hayes of Huston, Texas on September 16, 1935. They moved from Oklahoma to Dallas, Texas where they raised their four children, David, Robert, Virginia and Dorothy. Pearl worked outside the home at various times; but spent most of her life devoted to her family and home. Pearl is preceded in death by her parents, Herbert and Bessie Taylor; her husband, David L. Hayes; brother, "Little" Richard Taylor; sister, Gladys Holland, grandson, Michael Kitchens and niece Jimmie Mathis. She is survived by her sons; David L. Hayes and his wife Shirley, Robert Hayes and his wife Myrtle; daughters, Virginia Kitchens and her husband Leon and Dorothy J. Scott; her "special son" Frank Santa Cruz and his wife Mary; grandchildren, David R. Hayes and his wife Karen, Robert Johns and his wife Lisa, Jeramy Johns and his wife Laura, Ronald Hayes, Roger O. Hayes and his wife Sandra, Timothy Hayes and his wife Sandy, Gregory Hayes and his wife Julie, Bobby Kitchens and his wife Pattie, Dollie Fisk and her husband Erick, James Scott and his wife Connie, Richard Scott and his wife Dawn; brother, Herbert Taylor; sisters, Marie Johnston, Fern Taylor, Martha Mathis; as well numerous great-grandchildren, great-great-grandchildren, nieces and nephews, extended family, friends and neighbors. During her life, Pearl enjoyed caring for her family, camping, fishing, traveling, visiting her family and playing bingo with her friends. She will be greatly missed and forever loved. A gathering of family and friends will be held on Wednesday, July 2, 2014 from 6:00 to 8:00 p.m. at the funeral home. A funeral service will be held the following day, Thursday,July 3, 2014 at 11 a.m. also at the funeral home. Interment will be at 2:00 p.m. at Grove Hill in Dallas, Texas.

Quinlan Funeral Home
To order memorial trees or send flowers to the family in memory of Elsie Hayes, please visit our flower store.