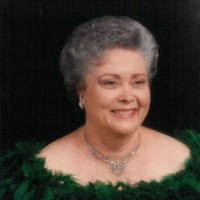 Ellen Rose Arnold Moffitt, 80, of Quinlan passed away Friday, August 14, 2015 at her residence. Funeral service will be 10:00am Wednesday, August 19, 2015 at the Quinlan Funeral Home Chapel with Dr. Don Gray officiating. Burial will follow in West Memorial Cemetery under the direction of Quinlan Funeral Home. Family visitation will be from 6:00pm until 8:00pm Tuesday, August 18, 2015 at Quinlan Funeral Home. Ellen was born June 2, 1935 in Quinlan, Texas to Jessie Arnold and Dolly Mae Ketner Arnold. She married Homer "Peet" Moffitt on November 4, 1954 in Quinlan. She graduated with her Master's degree in education from what is now known as Texas A&M University Commerce. She spent her 28 year career as a teacher with Quinlan ISD. Ellen was an active member of the First Assembly of God in Quinlan for 65 years. Ellen is survived by her daughters Jackie Newkirk and husband Rusty of Caddo Mills, Jaymie Coffey and husband David of Royce City, Laura Shaddox and husband Jimmy of Quinlan, Lynn Lorton and husband David of Fate and Rebecca Chreene and husband A.D. of Quinlan; thirteen grandchildren; ten great grandchildren; brothers Walter Arnold and wife Peggy of Mesquite, Doyle Arnold and wife Verda of Quinlan, Melvin Arnold and wife Lisa of Quinlan and Curtis Arnold and wife Cora of Quinlan; sisters Sue Lewis of Quinlan and Pam Bevers of Denton; numerous nieces and nephews. She was preceded in death by her parents; loving husband of 53 years Peet Moffitt; two brothers Charles Ray Arnold and Earl Arnold. The family asks that any memorial contributions that are made to please make them to Quinlan Education Foundation or the Quinlan Library.