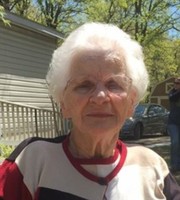 Dorothy Nell Rice,87, of Quinlan passed away Saturday, January 28, 2017, in Greenville. Dorothy was born November 20, 1929 in Terrell the daughter of James C. and Tressie (Nixon) Norris. She married Parvin W. "Pete" Rice at Boles Home on April 30, 1945. She retired from WalMart and was of Baptist faith.

Ms. Rice's family wishes to extend a special thanks to the management and staff at Legends Heath & Rehabilitation for their extraordinary care during the last two years.

Visitation will be held at Quinlan Funeral Home on Monday, January 30, 2017 from 6:00 pm to 8:00 pm. Funeral services will be held at 2:00 pm, on Tuesday, January 31, 2017 at the funeral home with Bro. David Hammond officiating. Interment will follow at Memoryland Memorial Park with Trever Jones, Toby Rice, Buster Johnson, Chris Boor, Jeremy Nash and Eric Rice serving as pallbearers.

To order memorial trees or send flowers to the family in memory of Dorothy Rice, please visit our flower store.