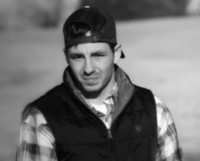 Corey Saunders, age 26, of Quinlan passed away Tuesday, January 2, 2017. Corey was born July 16, 1990 in Mesquite the son of Larry Saunders and Tammy Farris. He graduated from Quinlan Ford High School and worked as an Air Conditioning Technician.

He was preceded in death by: his son, Nathan Saunders; grandfather, Donald Farris; great grandparents, Samuel and Willodean Abernathy; and uncle, Michael Farris.

Visitation will be held at Quinlan Funeral Home on Friday, January 6, 2107 from 6:00 pm to 8:00 pm. Private family services will be held on a later date.

To order memorial trees or send flowers to the family in memory of Corey Saunders, please visit our flower store.