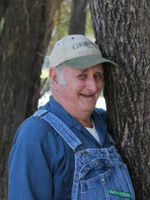 Billy Moody, 80, of Blue Ridge passed away April 14, 2018 at his residence. He was born in Fannin County on August 25, 1937 the son of William and Lillian (Bowers) Moody. Billy married Barbara Smith in Durrant, Oklahoma on October 13, 1957. She preceded him in death on July 28, 2006. He worked as a farm hand and for the City of Blue Ridge. Billy was also a member of Snow Hill Baptist Church.

To order memorial trees or send flowers to the family in memory of Billy Moody, please visit our flower store.