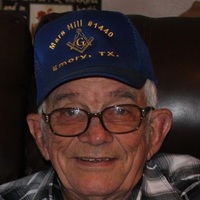 Billy James Medders, 86, passed away at Hunt Regional Medical Center in Greenville on Wednesday, April 22, 2020. There will be a public visitation from 10:00 am to 5:00 pm Friday, April 24, 2020 at Quinlan Funeral Home. There will be a private family service with Pastor Danny Calk officiating and his burial will be in Clifton Cemetery.

Billy was born on April 26, 1933 to James Walter Medders and Lois June (Garrett) Medders in Wilson, Oklahoma. He later met and married Maxine Stewart in 1975 in Tulsa, Oklahoma.

He was of Baptist faith and a proud 50+ year Masonic Lodge member. He loved to farm, fish, work in his garden, tend to his honeybees, and spend time with his family and friends. Billy retired as a Planner from Temco/LTV/E-Systems/Raytheon in the early 90s. He enjoyed camping and fishing in Colorado. His greatest joy was his grandchildren and great grandchildren. His warm heart and infamous story telling will be missed by all who knew him.

Billy is preceded in death by his parents, wife Maxine Medders and sister Joy Terry.

Quinlan Funeral Home
To order memorial trees or send flowers to the family in memory of Billy Medders, please visit our flower store.