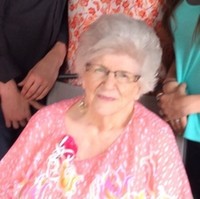 Billie R. Stone, 87, of Greenville passed away on Friday, November 4, 2016 in Frisco. She was born on April 18, 1929 in Chambersville, TX to John Edgar and Willie Frances (Farnsworth) Rogers.

Billie worked for twenty years as an Executive Secretary for Clint Murchison Jr. Group Founder of the Dallas Cowboys. One benefit for working for Clint Murchison Jr. was that he allowed her seats to many of the regular games, some playoff games, and even for super bowl games. She was on of the Cowboys loyal fans. She retired after serving thirty plus years in Civil Service. Nineteen of those years were in Greenville where she worked for several Commanders of Det 2 United States Air Force.

She will be remembered for her love of cooking for her family and friends, her ability to play the piano, and her 500-page book that chronicles her life. To keep her mind active, she would work crossword puzzles. She learned to do calligraphy and then became a teacher of calligraphy. She was well known in Greenville for her hundreds of letters to the editor in the Greenville Herald Banner which produced lots of positive and negative feedback from the community.

Billie is preceded in her death by her parents, John and Willie Rogers; one brother, Arleigh Rogers; and one sister, Amelia Tuton.

Her family that is cherishing the memories of her life are her daughter, Brenda Bell and her friend Howard Watts of Greenville; granddaughter, April Nichol of Lone Oak; grandsons, William Bowes and wife Toy of Commerce and Charlie Bell of Lone Oak; and fourteen great grandchildren.

Her memorial service will be on Saturday, November12, 2016 at 10 am in the chapel of Quinlan Funeral Home with Bro. Mark Garrett officiating.

To order memorial trees or send flowers to the family in memory of Billie Stone, please visit our flower store.