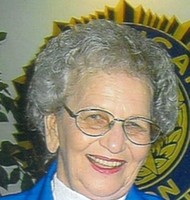 Billie was born April 9, 1928 in Bristol, Texas to Hugh Thomas Price and Jenny Hall Price. She worked for many years as an accountant for Safeway. She was married to James Pack and lived in Tawakoni for many years. She had a great sense of humor and brought excitement everywhere she went. She was an active member of the VFW and the American Legion.

Those left to cherish her memory are her daughter Carolyn Spicer of Euless; grandchildren Chris Broyles and wife Frankie of Irving, Craig Broyles and wife Kelly of Bellville, IL, and Marcus Nicklas and wife Meredith of Marana, AZ; brothers Jessie Price and Alvin Price. Billie was preceded in death by her husband James Pack in 2014; sons Danny Nicklas and Thomas Nicklas; two sisters and five brothers.

Online condolences may be made here or on our Facebook page.