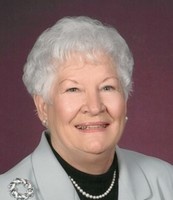 Betty Baker, 84, of Quinlan went to be with her Heavenly Father on Tuesday, February 2, 2016 in Dallas. Funeral service will be 2:00pm Saturday, February 6, 2016 at the Quinlan Funeral Home Chapel with Rev. Eric Rothe officiating. A gathering of family and friends will be 1:00pm Saturday at the funeral home. Arrangements are under the direction of Quinlan Funeral Home 8930 Hwy. 34 South.

Betty was born December 7, 1931 in Quinlan, Texas to James Charley Young and Leona Bumpous Young. Betty worked as a sales representative for McGraw-Hill for many years. After retiring she worked as a real estate broker. Betty also was the secretary and treasurer for the IOOF cemetery in Quinlan for many years, and a faithful member of the First United Methodist Church of Quinlan.

The family would like to thank all of the caregivers that have provided the special care for Betty over the past several years.

Memorial donations may be made to the First United Methodist Church in Quinlan or to the National Alzheimer's Association.

Online condolences may be made here or our Facebook page.

Quinlan Funeral Home
To order memorial trees or send flowers to the family in memory of Betty Baker, please visit our flower store.